Archival History of the Medical School and its 19th Century Facility 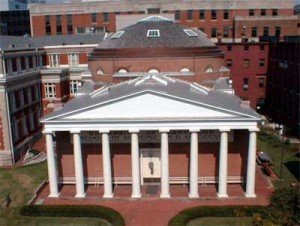 Davidge Hall, located in Baltimore, Maryland, is the oldest medical teaching facility in the northern hemisphere still in use.

The College of Medicine of Maryland, incorporated in 1807 and re-chartered as the University of Maryland in 1812, is the fifth oldest medical school in the country.

Its building, constructed in 1812, was renamed Davidge Hall in 1958 in honor of its founder and first dean, Dr. John Beale Davidge.

Designated as a National Historic Landmark by the U.S. Department of the Interior in 1997, Davidge Hall is recognized as the founding building of the University System of Maryland, the twelfth largest university system in the nation.

Events leading to the founding of the medical school in Maryland date back to the mid-eighteenth century, and the architectural evolution of medical buildings can be traced back to the Renaissance.