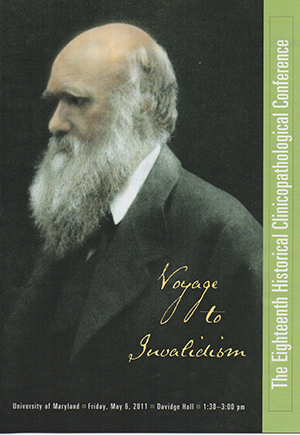 Historical figures, whose deaths have not been satisfactorily explained, are patients for our annual conference. Past conferences have examined the deaths of Edgar Allan Poe, Alexander the Great, Mozart and others. Following is the case history of this year’s patient.

This patient enjoyed excellent health as a youth, except for an upset stomach (mainly during breakfast) in his teens and brief eruptions (of unknown character) of his mouth and hands in his early 20s. When he was 22, he left his home in England for a 5-year voyage around the globe, during which he collected biological specimens in remote areas of South America, the Pacific,Far East and Africa. During these travels, he was frequently seasick, had several self-limited fevers, two instances of food poisoning, an inflamed knee and arm, intermittent boils,
heat stroke and a bout of “Chilean fever.” Even so, he thrived physically and mentally and returned to England at age 27—thin but well.

Approximately a year after his return, he had a brief episode of palpitations but otherwise was healthy for 18 months, when an attack of “gastric
flatus” heralded the onset of a violent abdominal disorder that would plague him for the next three decades. The disorder consisted of repeated sudden attacks of abdominal pain, nausea, vomiting and retching, typically occurring three hours after breakfast, and most frequent and severe during times of emotional stress. In the worst periods, he vomited after nearly every meal. Because he seldom regurgitated food, “only acid & morbid secretion,” his vomiting did not interfere with his intake or digestion of food, his general nutritional status, or his professional productivity. His bowel movements were normal.

Whereas the patient’s “gastric flatus” was his most distressing complaint, he also suffered intermittently with a panoply of other symptoms following his years abroad. When he was 29, he complained of violent cardiac palpitations and headaches. The palpitations were mentioned only once more, when he was 51, before returning with a vengeance just before he died. At age 51, he also complained of weakness and a “touch of pleurisy.” During his 30s, there were episodes of numbness of the finger tips, buzzing in the head, seeing stars, and giddiness and involuntary twitching of the hands. During his fifth and sixth decades, he wept a great deal while suffering with intermittent “rheumatism” (also described as “lumbago”), as well as boils and eczema of the face and hands. Interestingly, the fits of rheumatism and eczema seemed to alleviate his gastric symptoms and to make him “feel a little alive.” When he was 57, his horse fell and rolled on him, bruising him seriously.

The patient was the scion of a family of doctors. His mother died suddenly of an unknown disorder at age 52, when he was 8 years old. His father, who lived to the age of 82, was morbidly obese and, like his own father and grandfather, suf fered with gout. The patient had four siblings. An older brother struggled with depression before dying at age 77 of unknown cause. Three sisters died at ages 56, 63, and 88 of unknown causes. A paternal great-grandfather and grandmother were alcoholic. A maternal uncle and a paternal half-cousin had digestive problems of unknown etiology.

The patient married a first cousin at age 30. She was deeply religious, whereas he was not, and some have speculated that this difference might have had a role in the origin of the patient’s symptoms. They had ten children (7 male and 3 female). Three died young. The remaining seven had long lives; five developed hypochondriacal concerns about their health, possibly prompted by their father’s conviction that his own disorder was hereditary; five had fluctuating digestive troubles less severe than their father’s; and several exhibited a “tendency for irregular pulses,” possibly precipitated by their father’s close observation and frequent checking of their pulses. The patient’s one surviving daughter had nervous tics as a child similar to ones he is thought to have exhibited.

The patient was a naturalist. He smoked cigarettes and cigars occasionally and was addicted to snuff, used several times a day from age 18. He drank brandy, wine and port in moderation. Walking was his only exercise. As a youth, he was tall (6’) and lean with a light complexion and reddish-brown hair that receded rapidly after puberty. He had unspecified trouble with his teeth beginning in his third decade. Late in life, his long white beard and sunken eyes gave him the look of “The Patriarch of the World.”

During the patient’s final decade, his physical health improved markedly, with absence of “serious exacerbations of vomiting.” However, by his seventh decade, his memory was beginning to fail. While rock climbing at the age of 72, he experienced a sudden “fit of dazzling.” The precise character of the fit is uncertain but likely involved “giddiness and an irregular pulse,” in that he complained of these three months later. He then developed a cough which quinine seemed to alleviate. Shortly thereafter, he began complaining of precordial pain, giddiness, exhaustion and insomnia. Amyl nitrate He then became nauseated and began vomiting and retching consciousness, drank some brandy and seemed to recover. ness and fainted while trying to reach a sofa. Within minutes he regained provided little relief. Sitting at dinner one evening, he was seized with giddiviolently. This lasted until the next day, when he again lost consciousness and died. He was 73 years plus two months old. The cause of death was listed as “angina attacks with heart failure and degeneration of the heart and greater blood vessels.”

Sidney Cohen, MD, is professor of medicine and director of research at the Jefferson Medical College of Thomas Jefferson University in Philadelphia. A renowned gastroenterologist, Cohen’s research has centered on smooth muscle physiology and gastrointestinal motor function. He earned an undergraduate degree from Rutgers University and medical degree Magna Cum Laude from The State University of New York School of Medicine. Since training in Boston, Cohen has held several academic appointments including chief of the gastrointestinal section at the University of Pennsylvania from 1972 to 1986 and chairman of the department of medicine, vice president, and distinguished university professor at Temple University School of Medicine from 1986 to 2001. The Hoboken, N.J., native served as president of the American Gastroenterological Association in 1991 and in 2000 received its Julius Friedenwald Medal. In 1996, he was elected president of the Association of Professors of Medicine.

Ruth Padel, PhD, an award-winning British poet and writer, is author of Darwin—A Life in Poems, an internationally acclaimed verse biography of her great-great-grandfather Charles Darwin. She is also credited with I’m A Man: Sex Gods and Rock ‘n’ Roll, a study of Greek myth and its influence on the origins of rock music, and Tigers in Red Weather, an account of tiger conservation throughout Asia. Her first novel Where the Serpent Lives spotlights field zoology in forests throughout India and South England. She is a fellow of both the Royal Society of Literature and Zoological Society of London. Padel began as a Greek scholar at Oxford. In and Out of the Mind: Greek Images of the Tragic Self—one of two books from her PhD published by Princeton University Press—compares imagery of feeling in Greek tragic texts to imagery of disease in the Hippocratic authors. Padel authored several books on reading poetry and penned a newspaper column on how to read contemporary poems. More recently Silent Letters of the Alphabet addresses poetry’s use of silence. Padel is currently resident writer at the Environmental Institute of University College London where she is working on The Mara Crossing, an exploration of migration and immigration through prose and poems. She lived in Greece before becoming a freelance writer and also taught opera in the department of modern Greek at Princeton.