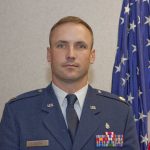 Joseph J. DuBose, M.D., is clinical assistant professor of surgery at the R Adams Cowley Shock Trauma Center at the University of Maryland. He received a B.S. in chemistry from the Virginia Military Institute in Lexington, Va., in 1996 and his M.D. from the University of Virginia School of Medicine in Charlottesville in 2001. Both his internship and residency training in general surgery were performed at Keesler Air Force Base in Biloxi, Miss., and afterwards he returned to the University of Virginia for a year as chief resident. In 2007, DuBose completed a one-year fellowship in surgical critical care at the University of Southern California in Los Angeles. Promoted to the rank of lieutenant commander in 2009, he participated in Operation Iraqi Freedom in Balad, Iraq, in 2009; Operation Enduring Freedom in Kandahar, Afghanistan, 2010; and Operation Enduring Freedom in Bagram, Afghanistan, from 2011 to 2012.

James I. “Bud” Robertson Jr., Ph.D., retired in 2011 as alumni distinguished professor of history at the Virginia Polytechnic Institute and State University after a 43-year career at the institution. A native of Danville, Va., Robertson earned a B.A. from Randolph-Macon College in 1955 and M.A. from Emory University in 1956 where he later earned a Ph.D. Recognized as one of the most distinguished names in Civil War history, Robertson served as executive director of the U.S. Civil War Centennial Commission, working with Presidents Truman, Kennedy, and Johnson in marking the war’s 100th anniversary. He has authored more than 20 books including his seminal, 950-page volume Stonewall Jackson, The Man, the Soldier, the Legend which claimed eight national awards. In addition, he has been a contributor to National Public Radio, Public Televison, and National Geographic. He taught the largest civil war history class in American higher education at Virginia Tech, averaging 300 students