This patient was an artist and a singular genius, who worked in media from etching to fresco, depicting subjects from the Virgin of the Immaculate Conception to the horrors of war. He was also one of the greatest portraitists of modern times.

In the fall of 1792, he came down with an illness of several weeks duration, of which we know only that it was diagnosed by contemporary physicians as “colic.” The following February he was attacked by a mysterious illness that nearly killed him. He survived but lost his hearing and for the next 35 years was “deaf as a stump.” The latter illness has generated endless speculation and nearly two dozen diagnoses because of who he was, and also because the character of his work changed so radically in its aftermath.

The patient was 46 when the two illnesses struck. Until then, he had enjoyed robust health except for a brief, unspecified disorder at age 32, and eight years after that, minor injuries suffered when a carriage he was taking for a test drive overturned.

According to letters and other contemporary documents, the illness that destroyed his hearing and nearly killed him lasted several months. For over two weeks he was too ill to leave his bed. Whether the illness came on gradually or all of a sudden, or if it involved fever, is not known. What is known is that it caused loud buzzing and roaring in his ears, and then mounting deafness. During its initial phase, the patient had difficulty maintaining his balance and for a time could not go up or down stairs without feeling in danger of falling. He was nauseated, complained of abdominal pain, and had no appetite. During the worst of the illness, he had difficulty seeing, was confused, hallucinated repeatedly, and had temporary bouts of partial paralysis. Eventually he recovered his faculties, including his eyesight. However, never again did he hear a sound.

Neither the patient nor any of the physicians he might have consulted had the knowledge to diagnose, much less cure, his disorder. Unfortunately, because the two doctors reported to have seen him left no record of their observations or conclusions, we are handicapped greatly in efforts to give his illness a name. The only additional information possibly relevant to the patient’s deafness concerns a considerable amount of lead white pigment, which he ground himself for use in his paintings.

The patient was born on March 30, 1746, in Zaragoza, the capital of the province of Aragón, halfway between Madrid and Barcelona. His father, José, was a master gilder. His mother, Gracia Lucientes, was the daughter of an hidalgo (hijo de algo—“the son of someone”). They had six children, four sons and two daughters. The patient was the fourth child.

At age 13 he was apprenticed to José Luzán, a local painter who had trained under Guiseppe Mastroleo in Naples. Luzán taught him the rudiments of design and made him copy the best prints he owned. The patient competed–unsuccessfully–in two academic competitions in Madrid before traveling to Italy to see, to study, and to absorb the high reaches of Italian art.

He married Josepha Bayeu, the sister of a fellow painter, when he was 28. Although there have been rumors that he was not always faithful, the marriage lasted without incident or scandal for 39 years. Josepha had over a score of pregnancies, from which only six children were brought to term. Just one son, Javier, born in 1784, survived infancy. The deaths of two of their children, possibly three, in the early 1780s coincided with a surge in infant mortality at the time, which one scholar has attributed to a rise in the incidence of smallpox.

In 1819, when the patient was 73, he was again seriously ill. Little is known of the nature of the illness other than that the physician who cared for him, Dr. Eugenio García Arrieta, was a yellow fever expert. The patient commemorated the illness and his physician in an ex-voto portrait thanking Arrieta for saving his life.

In late summer 1824, the 78-year-old artist arrived in Bordeaux and settled in a Spanish community that included several political refugees. He encountered an old friend, whose letters described him as “deaf, old, awkward and weak…but happy and wanting to see the world.” He was fit enough initially to travel to Paris for a brief sojourn before settling in Bordeaux.

In 1825, he complained of problems urinating. His doctors diagnosed paralysis of the bladder. An enormous tumor was present in his perineum. He died in his apartment at Intendencia Number 39 on April 16, 1828. 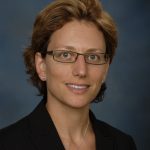 Ronna P. Hertzano, MD, PhD is associate professor in the department of otorhinolaryngology-head & neck surgery at the University of Maryland School of Medicine with a secondary appointment in anatomy and neurobiology. She received her medical and PhD degrees from Tel Aviv University where she was recipient of a Foulkes Foundation Fellowship physician-scientist award. Hertzano completed internship and residency training at Maryland during which time she established a collaborative research group named the Laboratory of Inner Ear Development Genetics. The focus of her basic science research is on understanding the molecular mechanisms leading to inner ear development as well as acquired hearing loss, using genomic, cell type-specific approaches.

Janis A. Tomlinson, PhD, is director of special collections and museums at the University of Delaware. She received her PhD in the history of art from the University of Pennsylvania in 1980 having earned a master of arts degree from Pennsylvania in 1977 and a bachelor of arts degree from McGill University in 1975. Prior to joining the University of Delaware in 2003, she served for four years as director of exhibitions and cultural programs at the National Academy of Sciences in Washington, D.C., and earlier as a fellow of the Woodrow Wilson International Center for Scholars, the Guggenheim Foundation, and was a member of the faculty at Columbia University in New York City.