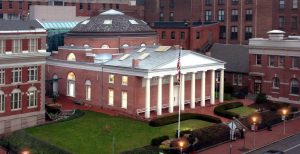 Davidge Hall, formerly known as the College of Medicine of Maryland, opened in Baltimore in November 1812 and survives as the oldest building in the United States continuously used for medical education.

Among the first physician-educators in Maryland was Charles Wiesenthal, who had been physician to Frederick the Great of Prussia before arriving in America in 1755. He settled in Baltimore and was instrumental in organizing the first Medical Society of Baltimore in 1789. He also lectured and taught anatomy to student physicians. After Wiesenthal’s death, his son and another of his students carried on the lectures and actually established a medical school during the 1790s. Although advertisements for the school are found in early newspapers, no further references to medical education in Maryland survive until the Medical and Chirurgical Faculty of the State of Maryland was founded in 1799. 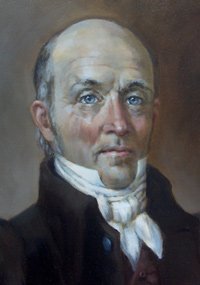 One of the charges of the new state organization was to establish a formal medical college, and a committee was appointed for this purpose. Three of its members, Drs. John Davidge, James Cocke, and John Shaw, were already teaching classes in their homes. In late 1807, Dr. Davidge constructed a small building on Liberty and Saratoga Streets where he and his colleagues began holding lectures and performing dissections. There was danger in teaching anatomy during this time because of the public outcry that usually occurred whenever the act of dissecting cadavers was discovered. After only one week of classes in the building, a riot broke out resulting in complete destruction of the edifice. It is ironic that on the very day of the riot, a resolution establishing the new medical school was introduced in the Maryland General Assembly. It could well be that this event influenced the speedy passage of the measure; in December 1807 the act naming and establishing the College of Medicine of Maryland became law.

Since the legislature refused to back any subsequent measures for funding, faculty members continued to teach classes in their homes. A short time later a lottery was instituted to help raise the necessary funding, but this too failed. It fell to the doctors themselves to finance the establishment of a medical school. They obtained a parcel of land from John Eager Howard, and construction commenced in May 1812. Classes were held in the first floor lecture hall in November of that same year. The total cost was about 35 thousand dollars.

The University of Maryland

On December 29, 1812 the College of Medicine of Maryland was rechartered as the University of Maryland, and the Regents were given the authority to establish schools of law, arts and sciences, and divinity in addition to medicine. The University became a state institution in 1920 when it merged with the then Maryland State College of Agriculture in College Park. Today the Baltimore campus includes the professional schools of dentistry, law, medicine, nursing, pharmacy, social work, and a graduate school.

Situated on the northeast corner of Lombard and Greene Streets, amidst rolling fields on the western outskirts of the city, the medical college commanded an unbroken view of the Patapsco River. It is said that, from the porch, one could watch the British bombardment of Fort McHenry in 1814.

The building was very large for its day but, no matter how elegant, life inside for medical students and their mentors often left much to be desired. The building, heated by stoves close to the ceiling, was dank and drafty in the winter. It was poorly lit and smelled of oil lamps. In addition, one could smell the stench from poor embalming practices of the period and from the chemical experiments performed in the lower lecture hall.

At the left of the grand entrance, a room once used as a classroom now serves as the office of the president of the University of Maryland Baltimore. On the right, a second room formerly used as a library is now a conference room for the president and the Medical Alumni Association.

The first floor lecture hall is called Chemical Hall, a semi-circular theater which no doubt gets its name from the brick kiln-like niches built in its front wall, each with a capacity of two cubic feet where chemical experiments were performed. The room can accommodate more than 200 people.

Directly above Chemical Hall on the third floor is Anatomical Hall which has rows of seating much the same as Chemical Hall. Along the top of the hall is a railing where the overflow of students stood to listen to lectures and watch dissections. Many of these students have carved their initials into the railing. The domed ceiling has a beautiful decorative network of semicircles and rosette patterns. It was in this room that the Marquis de Lafayette was awarded the first honorary doctorate from the University of Maryland in 1824.

Exiting Anatomical Hall through a narrow passage way toward the front of the building, the lecturing professor could make his way to a small lounge which overlooks a dissection lab. Today these rooms serve as the offices of the Medical Alumni Association.

Although traditionally attributed to Robert Cary Long Sr., an important Baltimore builder and architect, the design of the building exhibits characteristics found in the architecture of Benjamin Henry Latrobe and Thomas Jefferson. There is evidence to suggest that French architect Maximilian Godefroy, with Latrobe’s assistance, may have been involved with the design. The Building was given its current name Davidge Hall in 1958 in honor of the School’s first dean.

In 1970, Davidge Hall was designated an official historical site by the Maryland Historical Trust. Four years later, the building was entered on the National Register of Historic Places and, in 1997, was named a National Historic Landmark by the U.S. Department of the Interior.